Over the last week, Third Class have been learning about Ancient Greece. The Ancient Greeks were a very advanced civilization who invented many things such as the alphabet, laws, and many mathematical concepts. They also establishing schools and hospitals. Did you know that the first ever Olympic Games were held in Greece in 776BC. Many of the athletes competed naked and women were not allowed to take part, or even watch!

As part of our Art lessons, Seomra Aengus have been looking at Ancient Greek Urns and created our own using scraffiti. Scraffiti is a technique where you scrape away paint to reveal an image underneath. Greeks used to document daily Greek life on their urns. We made our urns by first drawing an urn shape. Next we used brightly coloured crayons to fill in the outline. Following this, we covered our urns with thick black paint and allowed it to dry overnight. Finally, we used a thin, sharp object to scratch away the paint and create an image underneath. 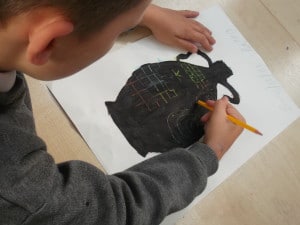 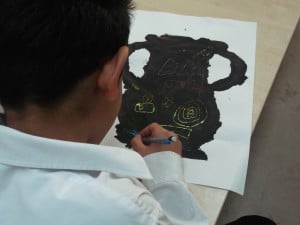