4th, 5th and 6th class pupils were visited by a musician during last week who gave some workshops on percussion 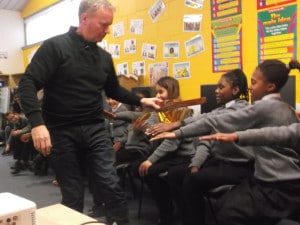 instruments. The children were shown many instruments that are part of an orchestra. The children were given the opportunity to try out drums and symbols. The musician, Paul Maher, was also involved with creating sound effects for films and showed the children examples from films such as ‘War of the Buttons’. He demonstrated which instruments were used to create the amazing sounds. The children also created music to accompany the song ‘I Gotta Feeling’ which they really enjoyed.