There were nerves a plenty on Sunday last when Scoil Ghráinne’s choir took part in their very first Peace Proms at the RDS in Dublin.

The Peace Proms were established in 1995 as a cross-boarder initiative and has been growing ever since. At it’s core is a 120 piece orchestra which is comprised of professional musicians from the four corners of Ireland. Every year schools from around Ireland are selected to perform along side the orchestra, and it’s an amazing opportunity for children with an interest in music to work with some of the top musicians in the country. This year, Scoil Ghráinne had their very first opportunity to take part.

Boys and girls from 5th class participated with over 2000 other children to a sold-out audience. Conductor Gearóid Grant helmed the concert, guiding the children through a number of well-known arrangements such as Happy, Let It Go, and a One Direction Medley. Whilst there might have been some nerves during rehearsals, the children from Scoil Ghráinne needn’t have worried. Hours of dedication and hard work paid off, and the children’s performance was outstanding in every respect.

Both parents and staff at Scoil Ghráinne are very proud of what the children have accomplished. 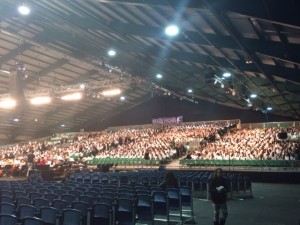 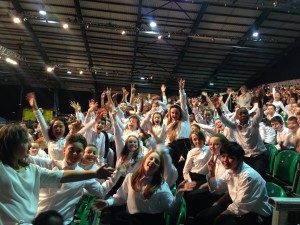 Well done to all involved, and here’s hoping for another successful appearance at Peace Proms 2016!

For more information about the Proms, you can check out the below website.