Wednesday the 30th of September was a truly historic day for Scoil Ghráinne. This is a day that will live long in the memory of all the children and the adults who were lucky enough to be present at an event of such importance.

On this day, the school was privileged to receive a visit from two members of the Irish Defence Forces. This visit was part of the ‘The National Flag for Primary Schools Initiative 2016 ‘. What this initiative involves is the presentation of the Tricolour and the Proclamation of the Republic of Ireland to the school and to announce the beginning of a year long celebration of the 1916 Easter Rising.

The children, impeccably behaved and excited about the event, gathered in the school hall. Anticipation was rising among the students and the staff alike. When the members of the Irish Defence Forces arrived, they were met with a rapturous roar and a loud applause from all who were present. The members of the Defence Force began to inform the children of some remarkable facts about our national flag. It was clear to see that the children were enthralled with what they were hearing.

The assembly then turned to it’s most important aspect, the presentation of the Tricolour and the Proclamation. Ibrahem (Mr. Byrne’s 6th class) and Bhoomika (Mr. Quilty’s 6th class) were presented with our flag. The reason these two students were chosen was because Ibrahem was the first boy and Bhoomika was the first girl to be enrolled in Scoil Ghráinne. Once this was done, one of the members of the Defence Forces read aloud the Proclamation of the Republic of Ireland, just as Padraig Pearse had done on the steps of the General Post Office on Easter Monday morning 1916. He was ably assisted by Gio from Mr. Byrne’s sixth class. Gio spoke proudly and eloquently as he recited the most famous and important document of Irish history.

This was a very proud and significant day for the Scoil Ghráinne community. Both the teachers and the children are extremely excited about teaching and learning all about the 1916 Easter Rising over the coming months. 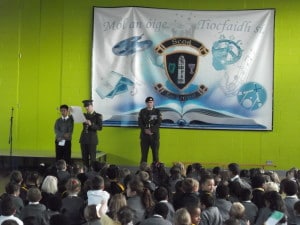 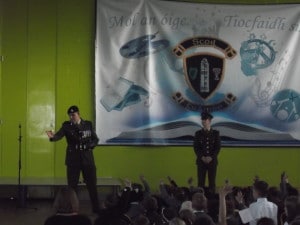